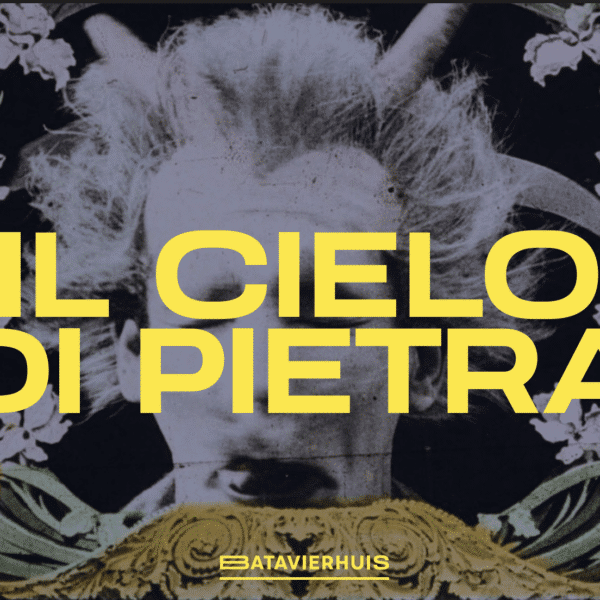 
“The Stone Sky” is a musical, visual and sonic show created with footage from cinematographic experimentation.

“That was when the trap was sprung: beyond the mouth of the crater the air vibrated in a continuous manner, or rather in a continuous manner that contained several discontinuous ways of vibrating. It was a sound that filled out, then faded, then increased in volume again, and in these modulations it followed an invisible pattern that stretched out in time like a succession of full and empty intervals. Other vibrations were superimposed on these, which were sharp and well separated from one another, but they blended into a drone that sounded now sweet, now bitter. As they countered or accompanied the course of the deeper sound, they created a kind of sonorous circle or field or domain. My immediate instinct was to escape from that circle, and return to the padded denseness: and I slid inside the crater. But in the same instant Rdix had run up the precipice towards where the sound came from and, before I could hold her back, had gone beyond the mouth of the crater.”
Italo Calvino, COSMICOMICS

At the beginning of XX century directors such as Segundo de Chomon, Georges Mèliés, JC Mol were experimenting on color, special effects and in the investigation of the microscopical details. The Bottasso brothers and Simone Sims Longo composed the music for the show enhancing the visionary approach of these directors, processing the films with modern digital means and playing with the degradation that time operated over the film material.
This performance is not a live soundtrack of a movie, but the visuals become the fourth element that performs on stage. A contemporary tribute to the first cinema projections, where the music was played live, where a voiceover might burst in, the film could “skip” or catch fire and the material of the nitrate film itself takes over the foreground.
The video samples come from the Eye Film Institute archive of Amsterdam.
Nicolo’ Bottasso | violin, trumpet, live electronics Simone Bottasso | diatonic accordion, flute, live electronics Simone sims longo | electronics, live visual

Duo Bottasso works mainly in the field of world music. The duo is always looking for a meeting point between their roots as folk musicians and their interest in contemporary and improvised music. All these combined with their brotherhood and the desire of keeping alive the traditions of their native land.

Simone Sims Longo is a composer and performer of electronic music. He is interested in creating and processing sound in the digital domain focused on timbre exploration with different techniques: physical modeling synthesis, sound granulation, FM synthesis, and digital sound deconstruction. In his works he often uses a multi-level iteration of sound samples, investigating asynchronous polyrhythmic texture changes.

Duo Bottasso & Simone Sims Longo won in 2019 the “Premio Loano per la Musica Tradizionale Italiana”: <<everything has begun from a button accordion and a violin, with the dancing traditional music of the Occitan valleys of Italy. The Duo Bottasso has grown up, studied and performed with musicians from all over the world and extended the sound of their instruments with electronics, until they met the sound designer Simone Sims Longo. If this is the folk music of the future, we’re looking forward to it. >> . As a trio, they performed in MACRO – Museo Arte Contemporanea (Roma), Torino Fringe Festival, Festival Ethnos (Naples), Kalternpop (Bolzano), Alpentoene (CH).