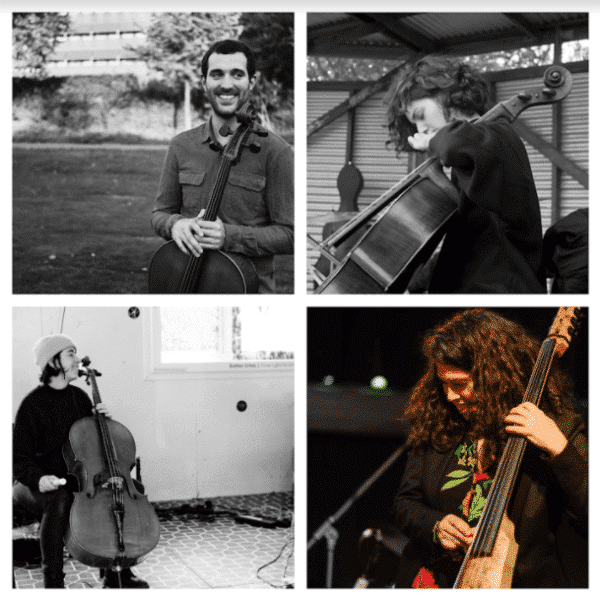 
This event brings together four Rotterdam based cellists united by their passion for improvisation. They all share common artistic background rooted in classical music but from there each takes a different direction exploring jazz, salsa, noise, ambient, experimental and traditional music. Every musician carries out a unique approach in creation of their own musical language through research of diverse techniques, stylistic approaches and potentials of sonic qualities.

Iván Nogueira is a cellist based in Rotterdam, The Netherlands. He graduated in June 2015 from Master in Classical Music at Codarts, Rotterdam Conservatorium. During the last years, he’s being very active in the development of diverse projects which are now his biggest signs of identity: DOT Quartet and AKOM Ensemble. Iván often arranges and composes music for his own projects. He is especially interested in the combination of the classical tradition with folk/Keltic music and jazz.

Batavier Lucija Gregov is a cellist, improviser and artist whose work describes and explores new sonic landscapes. Adding to her instrumental cello practice, she integrates analogue synthesizers and processed field recordings to her compositions. Her visceral approach to improvisation proposes a distinctive way of creating, co-creating, thinking and performing in and about current sonic dynamic.
Through many interdisciplinary collaborations, she seeks to push the boundaries of traditional cello playing which further extend her interpretation, technique and ideas. She has been developing projects and researching in the field of classical music, electro acoustic music, noise, improvisation, experimental music, radio and sound art, as well as community art.

The first time Marta González saw the cello, she knew that this was the instrument for her. Marta González is a cellist with a classical and modern background. Following her dreams and passion for the instrument and music, she decided to continue his musical journey in Rotterdam where she studied her bachelor and her master at Codarts. She collaborates with different artists combining different musical styles.

Nina Hitz is a cellist inspired by different artistic directions as John Cage and the conceptual music of the New York school as well as Wandelweiser, an originally German music direction and record label that is interested equally in sound as in silence, electronic and experimental music, but also movement, dance and martial arts. She studied baroque cello and is a member of moving strings.